The battle of the ring tones: boon for artists

Following the introduction of a caller ring back tone service by mobile phone operator Zain- branded ZIKI; Safaricom has also introduced its own service by the name SKIZA.

The service enables subscribers to choose a preferred song and set it as their ring back tune for callers to listen to while waiting for the call to be picked up.

To use a single tune, Zain customers have to pay a monthly fee of Sh40 and while Safaricom has pegged its fee at Sh.25.

While the competition between the networks intensifies, its good news for the local musicians who stand to generate additional revenue in licence fees paid for use of their music as ring tones.

As reported by Afro-IP here the battle between Sanitam Services Ltd and Rentokil Initial Kenya Ltd over patent infringement rages on. This time round it was Rentokil (the plaintiff) instituting proceedings in the High Court to restrain Sanitam (the defendant) from threatening, intimidating, harassing, embarrassing and confusing Rentokil’s clients and customers over sanitary bin it provides to them.

Rentokil made the application for temporary injunction after Sanitam wrote letters to various companies warning them to stop using sanitary bins supplied by the plaintiff, which the defendant considered to be infringing its patent AP 773 granted by ARIPO.
In contention it was the defendant’s case that by using the bins supplied by the plaintiff, the said clients were infringing the Sanitam patent.

It is worth noting that this is the fourth time in the last 10 years the parties are in court over the issue of infringement of the same patent. The matter goes back to 1999 when Sanitam sought a temporary injunction against Rentokil, which was denied by the High Court. There after the matter went for full hearing and again Sanitam lost with the Court ruling that it had not proved a case of infringement. Sanitam appealed to the Court of Appeal and prevailed in obtaining in 2006 a permanent injunction to last for the “life of the patent”.

Last year alone Sanitam obtained injunctions against a number of companies, among them Nairobi Bins, reported here and Hygiene Bins.

In the current battle with Rentokil one wonders at the expense the parties have incurred in the last 10 year they have been at each others throat. Would it not perhaps make time and shilling wise sense for the parties to settle the matter out of court? Wouldn’t a licensing arrangement be a win-win situation? Or are we likely to continue witnessing some more epic battles in the trilogy. Now that we have seen the first 4 episodes, is there likelihood of episode V- the empire striking back.

For star wars episode I-VI here
Posted by Njuguna at 11:24 AM 1 comment:

IP Kenya has spotted a rather curious notice by the Ministry of Transport, which states that the Ministry is in the process of vetting all speed governor fitters and is inviting the fitters to submit the following:

IP Kenya wonders why the ministry requires the fitters to have patented gadgets. Though the notice does not say, what will happen to fitters who may have not bothered to patent or whose patent rights have expired?

A patent on how to bypass a speed governor here

A report in the nation indicates that, in a move to shape the image of the country, the Brand Kenya Board is hoping to convince Kenyan exporters to include the BrandKenya logo on all products originating from Kenya.
According to the CEO the Board will be holding stakeholder meetings for the next 6 months and all manufacturers are expected to come together to agree on the use of the logo.
However and in contrast to the trend in other countries where companies pay a fee to use such logos on their products, the Board will not charge any fee.
The Brand Kenya Board was formed in March 2008 to develop a national identity and image to market the country internationally as a tourism and conference destination, export leverage, Foreign Direct Investment, internal and external public diplomacy. To this end, the Board is developing a strategy to create a strong and positive image for Kenya as well as foster international confidence in the country.
Posted by Njuguna at 12:57 PM 1 comment:

The Nation reports that a University of Nairobi scientist, Gideon Nyamasyo and Imenti North MP differed over whether Kenya should adopt genetically modified crops to counter food shortage. In supporting the recently passed Biosafety Bill 2008, the lecturer said adopting GMO technology was the only way Kenya could free herself from the prevailing hunger. He believes that Kenyans lacked awareness on the importance of GMOs largely because personal interests have overshadowed proper debate.
However, the MP dismissed the lecturer’s suggestions, saying Kenyans would be put at risk if the technology was adopted. The MP was of the view that only a few people would benefit if the Biosafety Bill 2008 becomes law as only those who are financially able will control the seed sector.
The Biosagety Bill 2008 seeks to establish a National Biosafety Authority to regulate activities in genetically modified organism. The Bill further aims to facilitate research into and minimize the risks that may be posed by GMOs. According to information on the Parliament’s website, the Bill was passed 9th December 2008 and is only waiting for assent by the President to become law.
Posted by Njuguna at 10:40 AM 2 comments: 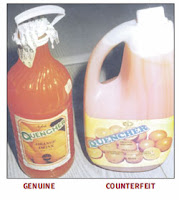 In an investigative report, the Standard details how wheeler-dealers in the counterfeit industry go about their “business”. From mobile phones to spirits, the counterfeit barons are able to imitate any “commodity.” All they require is a sample or even a photograph of the genuine item and they will have a fake one manufactured in China at a fraction of the retail price in Kenya.
The barons are also defrauding the Kenya Revenue Authority of billions of shilling by making fake revenue stamps that are mainly used by manufacturers of wines and spirits. For example, one Chinese baron was found with 25,000 pieces of revenue stamps each retailing at Ksh 5. The stamps are then sold to unregistered manufacturers to sell unlicensed wines and spirits. KRA is worried that the fake stamps are perfectly made to look real and a layman will not notice the difference.
Posted by Njuguna at 1:21 PM No comments:

Writing for the Standard Newspaper, Harold Ayodo is of the opinion that Parliament should enact new intellectual property “laws to enable citizens reap maximum benefits from innovation.”
He also believes that such laws are necessary to “protect ideas and information of commercial value” in order to stop “reproduction of works without permission from innovators.”
The writer further contends such laws would protect the public universities who are “victims of foreign institutions” who take credit for breakthroughs in joint research studies. This is perhaps in reference to the dispute in 2000 between the University of Nairobi and Oxford University over patent ownership and omission of Kenyan scientist as inventors in a patent application.
Whereas it is true as the writer says that the economy loses billions of shillings due to infringement of IP rights, it is debatable whether the causal agent is lack of IP laws, as he seems to suggest or weakness in existing laws.

As this blog has argued, the problem is not lack of IP laws but general weakness in the various existing laws, and more so to do with the thorny issue of enforcement. Such weaknesses in existing laws should be addressed through suitable amendments rather than enactment of other pieces of legislation, which seems to be the preferred thinking.
Posted by Njuguna at 4:28 PM No comments: